Why is there a shoe in the wall of my new home?

Today’s closing was out of the ordinary. First, it was a $1,000,000+ home in Maplewood. However, what made it STAND out was one of the gifts the seller left behind–a well worn shoe from the late 1800’s. She found the shoe when she renovated the home and kept it in a special place since. Why? Well legend has it that shoes were often put in areas of the home to ward off evil (see below for article specifically addressing this issue). 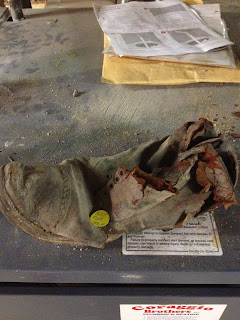 Of course, I couldn’t help but start humming and then singing:

This old man, he played one,
He played knick-knack on my thumb;
Knick-knack paddywhack,
Give a dog a bone,
This old man came rolling home.

This old man, he played two,
He played knick-knack on my shoe;
Knick-knack paddywhack,
Give a dog a bone,
This old man came rolling home.

My research turned up the following:

When owners of old houses begin renovations, they should be aware that they might turn up some unexpected treasures in the walls of their homes. Two Wayland families have discovered a trove of old shoes hidden in the house walls, a reflection of an ancient superstition that hiding shoes in a house as it was being built, would ward off evil.

Jennifer Swope, assistant curator of the Society for Preservation of New England Antiquities, points out that although hundreds of these concealed shoes have been found in buildings in both Europe and Eastern United States no one has ever photographed these finds in the exact site where they have been found.

When tearing out the wall in an old chaise house about eighteen years ago, James and Mary Reed found a baby’s white, ankle-high shoe, some small wooden toys and some ears of corn. Their Old Sudbury Road home has been the site of so many additions since the earliest part was built about 1750 that they were not sure whether the shoes were hidden at the time the chaise house was built or in a later renovation.

Why would shoes be deliberately built into a home or public building? Some have speculated that the tradition stems from the prehistoric custom of killing a person and placing the body in the foundation to insure that the building holds together. Later shoes were used as a substitute for a human sacrifice. Shoes may have been chosen, because over time they take on and keep the shape of the wearer’s foot. Shoes were hidden near openings in the home–doors, windows, chimneys–the perceived weak places in the building that were thus protected from evil by the shoe owner’s spirit.

About half the shoes registered in the concealment index are children’s shoes. Women’s shoes are more common than men’s. Shoes are almost invariably well worn, perhaps because the donor didn’t want to waste an expensive new shoe on the project, or perhaps because a well-worn shoe is more likely to retain the shape of the wearer’s foot and hence his spirit. Though shoes are the common denominator, more than two hundred different personal possessions–coins, spoons, pots, goblets, food, knives, toys, gloves, pipes, even chicken and cat bones–have been found hidden with them.

Considering how widespread and long lasting this folk belief has been, it is curious that nowhere was it described in writing until references began to appear in mid-twentieth century archaeology literature in scholarly journals. Some speculate the tradition of hiding shoes was a male superstition, kept secret almost out of fear that telling about it would reduce its effectiveness. Others feel contemporary writers did not describe it since superstition ran counter to prevailing religious beliefs and the Puritans punishment of witchcraft and magic was well-known.

When removing walls especially around windows and doors, under roof rafters and behind old chimneys, homeowners should be aware of the possibility of turning up concealment shoes. While most are found in eighteenth and nineteenth century homes, a find hidden as late as 1935 has been reported. If shoes are found, they should left exactly as they were discovered and photographed. Items found with the shoes are as important as the shoes themselves and should also be saved.

For the full article above: http://wayhistsoc.home.comcast.net/~wayhistsoc/whs/Shoes_in_the_Wall/shoes_in_the_wall.htm

and if you want to join me:

This old man, he played two,
He played knick-knack on my shoe;
Knick-knack paddywhack,
Give a dog a bone,
This old man came rolling home.

This Old Man…Played Knick Knack on my Shoe