Urbane Flavor Is South Orange’s Allure from WSJ May 14, 2011 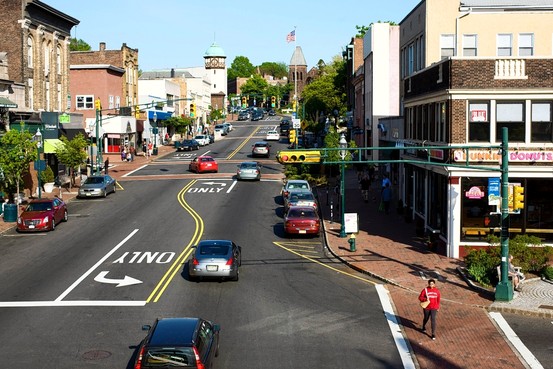 Brian Harkin for The Wall Street Journal
Downtown in South Orange, which is about a half-hour ride to Midtown Manhattan on New Jersey Transit.

The township of South Orange village in Essex County, N.J., a farming community for 200 years, became a suburb of Newark and a popular summer retreat after the railroad arrived in the 19th century. Wealthy New Yorkers built grand mansions in what is now South Orange’s historic Montrose district, near the 2,000-acre South Mountain Reservation, a popular park.
Today the village retains a quaint and rustic feel. Gaslights and stately oak trees line streets with houses ranging from 80-year-old Tudors, Victorians and Colonials to well-kept historic mansions. The half-hour ride to Midtown Manhattan on New Jersey Transit, as well as South Orange’s reputation as an artsy and sophisticated community, attracts young families from New York City, Hoboken and Jersey City seeking suburban space with an urbane feel. 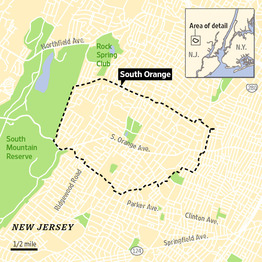 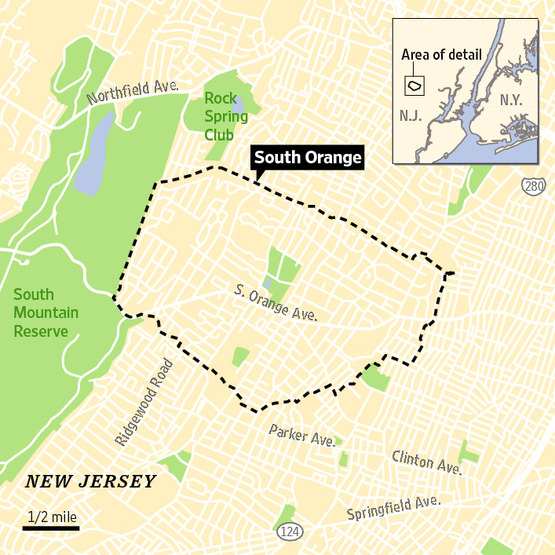 “The beauty of these communities is they have so much to offer, they’re very heavy into the arts, and very supportive of the arts, and very diversified in terms of economics and lifestyles,” says Mark Slade of Keller Williams, speaking of South Orange and Maplewood, which share a school district. “The proximity to New York City gives people the ability to have a house and a yard… and yet live in the city when we want to, so we sort of get the best of both worlds.”
The downside of South Orange’s accessibility and small-town feel are its relatively high taxes. Because the village has no malls or industry, the tax base relies heavily on property owners. For example, the annual taxes on a house valued at $500,000 would be about $13,000.
Homes, however, can cost less than in nearby towns with lower taxes. The median price for listings in South Orange is $530,000 according to StreetEasy.com, compared with $622,000 in neighboring Millburn, which has tax revenue from the Mall at Short Hills.
Though prices have dropped during the downturn—according to Zillow.com, sale prices declined about 11% between September 2008 and September 2010—real-estate brokers say the region’s easy commute to Manhattan has kept values steadier than in farther-flung spots. “What’s keeping this area alive and better than the rest of the world is the train,” says Cherre Schwartz, of Weichert Realtors.
The village has been revitalized by new development over the past decade; notably, a mixed-use development downtown that includes the Eden Marketplace. The gourmet grocery store opened in 2008 at a formerly vacant site. The development also is home to the Avenue at South Orange, a 79-unit complex planned as condominiums, but which opened last year as luxury rentals. The apartments range in price from $1,800 to $3,900, and are now fully leased. The South Orange Performing Arts Center, a cultural venue that showcases both national and local acts, opened in 2006 after 10 years of planning.

South Orange is also home to Seton Hall University, a 155-year-old Catholic-affiliated school with a 58-acre campus and about 10,000 students.
“There’s a lot for every age, whether you sold your house and want to scale down, or you’re a young kid who wants to commute from the suburbs, or a young family,” Ms. Schwartz says.
Thanks in part to its pedestrian-friendly downtown and vibrant network of parks and playgrounds, the community of around 17,000 people is tight-knit.
“You have all the benefits of living in a small town, where people are active and involved,” says Sarah Macyshyn, of Coldwell Banker Residential Brokerage, who has lived in the area for 26 years. “Three months after I moved here, I couldn’t walk into the village without running into someone I knew.”
Parks: The village of South Orange includes more than 77 acres of parks, several of them clustered around the Baird, a 100-year-old building that serves as headquarters for the recreation department. The 14-acre Floods Hill is a popular spot for sledding in the winter and outdoor concerts in the summer. Nearby South Mountain Reservation, a 2,047-acre green space within the nearby towns of Maplewood, Millburn and West Orange, which borders South Orange, includes woodlands, a waterfall and a reservoir, as well as the Turtle Back Zoo and the Richard J. Codey arena. A community pool, with Olympic-size, intermediate and wading pools, as well as deck seating and a picnic area, is free to village residents.
Schools: South Orange is part of the South Orange-Maplewood School District, which has more than 6,400 students. Two of the district’s six elementary schools and one of its two middle schools are in South Orange. The two towns share Columbia High School, where 98.3% of students graduated in the 2009-10 school year, with 91.6% reporting plans to continue with their schooling, according to state data. That year, 90.7% of high-school students were proficient or advanced in language-arts literacy, and 79.3% in math, state data show.

The Floods Hill park is popular for outdoor concerts in the summer. 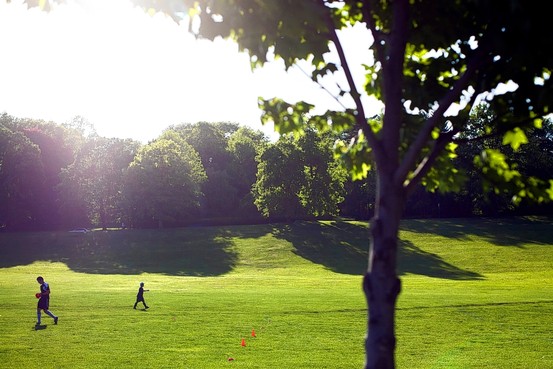 Local private schools include the Our Lady of Sorrows School, a Catholic school with about 200 students in preschool through eighth grade.

Dining: Restaurants in South Orange range from casual and family friendly eateries to the upscale, including the Above Restaurant and Bar, which opened upstairs from the Eden Marketplace in 2009. Other popular options include Antonella’s, a BYOB Italian restaurant, and Papillon 25, a restaurant and martini bar.
Shopping: The Eden Marketplace, a grocery and specialty food store, opened in downtown South Orange in 2008. Both South Orange and nearby Maplewood have several independent stores, including Kitchen a la Mode, a cookware shop. The Mall at Short Hills and the Livingston Mall are located about 10 minutes away.
Entertainment: The South Orange Performing Arts Center, a five-year-old cultural venue, includes both a 415-seat theater hosting concerts and plays, and a five-screen cinema.