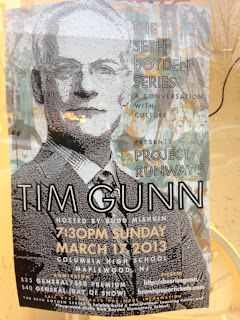 First there was the sold out show featuring Ira Glass. Now The Seth Boyden Series: a conversation with culture announces the upcoming appearance of Project Runway’s Tim Gunn live on stage in SOMA’s Columbia High School on Sunday, March 17 at 7:30 pm.

Tim Gunn is the Fashion Dean at Fifth & Pacific Inc (formerly Liz Claiborne Inc). He also serves as co-host of the six-time Emmy-nominated “Project Runway,” a reality-based fashion design incubator, the eighth season of which broke all previous seasons’ ratings records. “Project Runway” received GLAAD Media Awards in 2007 and 2011 and a Peabody Award in 2008. For the period of 2 years, I served as the Children’s Design Consultant to F.I.T., so I always took extra pride in what Tim did on Project Runway.

The Seth Boyden Series was created to raise funds in support of a new playground and Outdoor Learning Center at the Seth Boyden Demonstration School in the Maplewood/South Orange NJ School District.

There are currently no listings in South Orange Village Township,Maplewood Township but please check out these great listings: