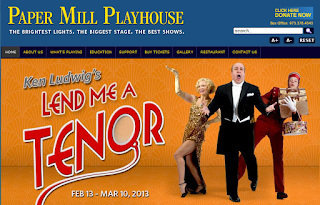 Don’t miss your chance to see what everyone is raving about!

A Door-Slamming Farce, “Lend Me A Tenor” Reviewed

Paper Mill Playhouse’s new show starts out funny and keeps getting funnier — even if you’ve seen it all before.

New Jersey loves its sopranos, but for the next few weeks, tenors are the dominant class in the northern area codes. And theater fans from Cape May to Cliffside Park will want to share the mayhem and merriment at Paper Mill Playhouse in Millburn.

No doubt the majority of regular theatergoers have seen at least one production of “Lend Me a Tenor,” a door-slamming farce that has been a staple of professional and community theaters since its debut in 1986 on London’s West End. It debuted on Broadway in 1989, where it earned nine Tony nominations (winning two), and was revived there in 2010.

Fortunately, “Lend Me a Tenor” is one of those gems that stands up to repeated viewing — as long as it’s done well, which is no easy feat. The good news is that not only is it done well here, but the cast makes it looks easy — and believe me, it’s not — making it that much more fun to watch.

There are currently no listings in Millburn Township but please check out these great listings: