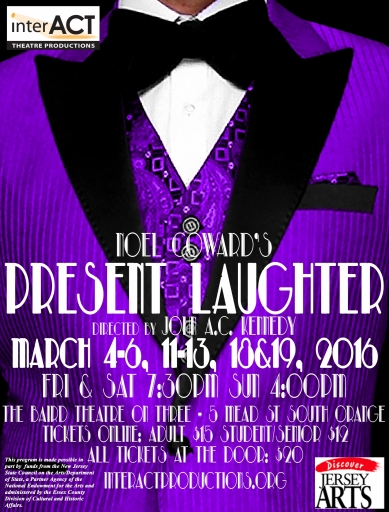 Directed by John A.C. Kennedy and starring a talented cast of local performers including:

This play, Present Laughter, centers on Garry Essendine (played by Davies), a character Coward wrote to explore the conflicts and absurdities of middle age. Garry juggles women who want to seduce him, a long-suffering secretary (Hart), housekeeper (Tiné) and estranged wife (Jin) who fear his misadventures will wreck both their personal and professional partnerships, and a crazed young playwright (Jones) who invites himself on Garry’s upcoming journey to Africa.

Described by Coward himself as “a series of semi-autobiographical pyrotechnics,” Present Laughter has been produced four different times on Broadway and many more times in London, starring actors as different as Coward himself, Ian McKellen, Albert Finney and Columbia High School graduate Frank Langella in the title role. When it was first produced, critics hailed Present Laughter as “the best comedy of its kind and generation.”

Present Laughter opens on Friday, March 4 and runs on weekends through March 19, with the curtain rising at 7:30PM on Fridays and Saturdays, and 4PM on Sunday matinees (performed on March 6 and 13). Present Laughteris directed by John A.C. Kennedy of Springfield, stage managed by Elizabeth Rogers of West Orange, and produced by Kimberly Mullaney of Maplewood and Elena Svitavsky of South Orange.

Tickets are available at interactproductions.tix.com

More information about the show and actors can be found on the interACT Website.