Newark Museum’s American Art Collection, one of the Finest in the Country 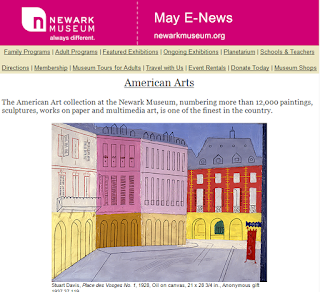 The Museum began its commitment to African American art in 1929 with the acquisition of an important painting by Henry Ossawa Tanner. It has continued to build a strong collection in this area adding works by Romare Bearden, Jacob Lawrence and Robert Thompson as well as the work of more contemporary African American artists including Melvin Edwards and Carrie Mae Weems.

Flower PieceOne of the collection’s core strengths is early American modernism, in part the result of the Museum’s commitment from its founding in 1909 to collect the work of living artists. America’s foremost modernists are represented, including Edward Hopper, Max Weber, Georgia O’Keeffe, Marsden Hartley, Robert Henri, John Sloan, Arthur Dove, Theodore Rozsak, Charles Sheeler and Alexander Calder. The collection also possesses one of the great landmarks of American art, Joseph Stella’s monumental Voice of the City of New York Interpreted, and holds one of the greatest collections of geometric abstraction in the country. In addition, the Museum is the largest repository of works on paper created under the auspices of the Federal Arts Project of the Works Progress Administration (WPA), and possesses over 100 vintage prints by the photographer Berenice Abbott as well as important photographs by Edward Steichen and Edward Weston.

The Museum’s commitment to folk and outsider art continues in its 20th century holdings, maintaining the world’s largest collection of sculpture by William Edmondson as well as important works by Bill Traylor, David Butler and William Hawkins.

The collection boasts a fine selection of mid-century paintings by Helen Frankenthaler, Robert Motherwell, Wayne Thiebaud and others as well as important sculptures by Andy Warhol, Louise Nevelson and George Segal. The Museum’s post-war photography collection is especially strong with major examples by Cindy Sherman, Lorna Simpson and Andres Serrano. The Museum continues to collect the art of its time, building an important contemporary collection that includes work by Martin Puryear, Chakaia Booker, Elizabeth Murray among others, as well as multiple works in a variety of media by such artists as Alexis Rockman, Willie Cole and Alison Saar. New media is represented by examples of video installations by Nam June Paik and Pepón Osorio.