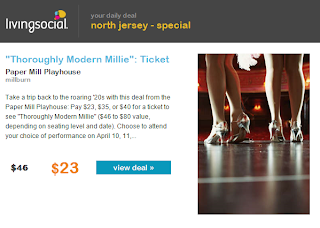 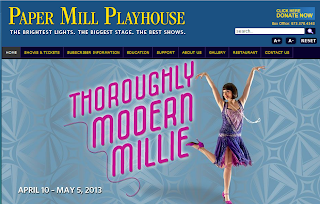 Thoroughly Modern Millie will run at the Millburn, New Jersey, theater from April 10 through May 5, 2013. The official press opening is Sunday, April 14, at 7 pm.

Thoroughly Modern Millie is generously supported by a gift from Allen and Joan Bildner.

Thoroughly Modern Millie is an effervescent musical romp that will have you dancing the Charleston. It’s the Roaring Twenties, and young Millie Dillmount has just arrived in New York City, a place filled with frisky flappers, dashing leading men, and a dragon lady of a villainess. Based on the 1967 film of the same name, Thoroughly Modern Millie opened on Broadway in April 2002. Featuring hit songs such as “Gimme Gimme” and “Not for the Life of Me,” the production subsequently won six Tony Awards® and five Drama Desk Awards, including the win for Best Musical at both award ceremonies.

Thoroughly Modern Millie will be performed eight times a week, Wednesday through Sunday. Performance Schedule: Wednesday at 7:30pm, Thursday at 1:30pm and 7:30pm, Friday at 8 pm, Saturday at 1:30pm and 8:00pm and Sunday at 1:30pm and 7:00pm. Single tickets are on sale now and range from $26 to $97. Tickets may be purchased by calling 973.376.4343, at the Paper Mill Playhouse Box Office at 22 Brookside Drive in Millburn, or online at www.papermill.org. Visa, MasterCard, Discover, and American Express accepted Groups of ten or more can receive up to a 40% discount on tickets and should call 973-315-1680.

The production will star Laurie Veldheer as Millie Dillmount, seen recently in Disney’s Newsies on Broadway reprising the role she created at Paper Mill Playhouse. The role of Jimmy Smith will be played by Jeff Kready, seen on Broadway, in Billy Elliot and the revivals of Sunday in the Park with George and Les Misérables. The role of Muzzy van Hossmere will be played by Tony-nominated actress Brenda Braxton – recently seen in the second season premiere episode of NBC’s musical drama “Smash” – and seen on Broadway in Chicago, Smokey Joe’s Café, Jelly’s Last Jam, Dreamgirls, Cats and more. Mrs. Meers will be portrayed by prominent actress Lenora Nemetz, well-known for her roles on Broadway in Cabaret, Chicago and Working, who last appeared at Paper Mill Playhouse in Show Boat (taped for PBS) and as Adelaide in Guys and Dolls. Trevor Graydon will be played by veteran actor Burke Moses, whose Broadway credits include Guys and Dolls, Disney’s Beauty and the Beast and the revival of Kiss Me, Kate, among others.

Miss Dorothy Brown will be portrayed by Ashley Kate Adams. Ms. Adams returns to Paper Mill following a successful run in The Sound of Music earlier this season. Providing comic relief are Mrs. Meers’ henchmen Billy Bustamante (Bun Foo) and James Seol (Ching Ho). Mr. Bustamante has performed at theaters throughout the country including The Public and The Kennedy Center. Mr. Seol appeared on Broadway in A Naked Girl on the Appian Way. Jessica Sheridan will play Miss Flannery. Ms. Sheridan appeared on Broadway in Sister Act, Follies, Mary Poppins and Les Misérables.

Lighting design by Kirk Bookman. Bookman’s credits include: The Gin Game, The Sunshine Boys and Gentlemen Prefer Blondes on Broadway. Closer Than Ever (York), NY Philharmonic’s Company (also broadcast in movie theaters nationwide) and at regional theaters and ballets throughout the United States.

Sound design by Paper Mill Playhouse Resident Sound Designer Randy Hansen. Over the past twenty-five years, Hansen has designed hundreds of musicals, plays, and live events all over the country.

Hair and wig design by Rob Greene and J. Jared Janas. Recent Broadway designs and consultations include The Gershwins’ Porgy and Bess, Peter and the Starcatcher, All About Me, and Next to Normal. Paper Mill Playhouse productions include Curtains and Peter Pan.

Thurs. April 18 Learn more about the show you are about

Thurs. April 25 to see, led by members of Paper Mill’s

Thurs. May 2 Artistic and Education Departments.

Meet the cast and ask actors questions about the show or the role they are portraying.

PAPER MILL PLAYHOUSE, a not-for-profit arts organization, is one of the country’s leading regional theaters. Paper Mill Playhouse programs are made possible, in part, by funds from the New Jersey State Council on the Arts/Department of State, A Partner Agency of the National Endowment for the Arts. Paper Mill Playhouse is a member of Theatre Communications Group, the National Alliance for Musical Theatre, the Council of Stock Theatres, and the New Jersey Theatre Alliance.
Mark Slade
Keller Williams
917.797.5059
Good Homes

There are currently no listings in Millburn Township but please check out these great listings: