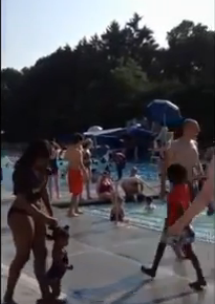 The Township Committee voted 4-1 Tuesday night to approve a pilot program to open the Maplewood Community Pool on Memorial Day weekend, and to add an additional $30 to membership rates to cover associated costs. The vote will be memorialized at the next meeting on March 5.

Typically, the pool opens on Father’s Day weekend. The new plan will mean the pool will be open for a total of seven additional days, or three extra weekends.

Before the vote was taken, the four other committee members expressed concerns with the amount of the increase and with raising the membership rates on the heels of last year’s 30 percent increase.

(Last year, fees increased to pay for more than $1 million in bonds issued to pay for improvements including new waterslides, a new pool deck with better drainage, new dive platforms and diving boards, and handicapped accessible ramps into the pool.)

“Remember the people who are recommending this are (the) pool users, not the township committee,” said Mayor Vic DeLuca, referring to the Pool Advisory Committee, which represents pool members. The committee recommended the change in response to a pool survey conducted last October wherein a number of participants requested an earlier start to the pool season.

DeLuca also said the members of the Pool Advisory Committee had discussed the potential for higher pool attendance this summer due to the damage to the Jersey Shore from Hurricane Sandy, and the fact that some South Orange residents now have the option to join the Maplewood Pool. He also noted that the South Orange Pool was opening earlier this year as well.

For more of this article: Maplewood Patch

There are currently no listings in Maplewood Township but please check out these great listings: