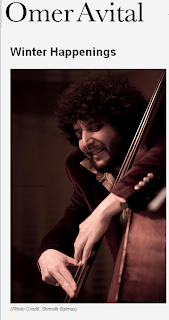 It was an honor and privilege to have helped Omer and his family find their wonderful new home last year.

Omer writes:
Hello everyone,
2012 has been great year for me. After having the opportunity to perform new & old music with my different projects in the USA, Europe, Israel and Japan. The year came to a close with a magical week with my Suite of The East group in Paris – where my latest album was celebrated as the best album of the year at the grand annual TSF Jazz event at Olympia Music hall, followed by a four-night residency at Duc des Lombards (read about it here).

Now I’m getting ready for some shows with Yes! Trio in NYC, Suite of The East group in Amsterdam and, and Daniel Freedman’s band in Montreal – A special band with Lionel Loueke and Jason Lindner. See more details below.

“Wishing you a great year, full of music and love!”

Suite of The East enters prestigious Best albums of 2012 lists

We are honored to learn that Omer’s latest album has been listed as one of the best albums this year by some of the most regarded magazines, radio stations and jazz blogs:

There are currently no listings in Maplewood Township but please check out these great listings: