Living in Montclair: Who took the First SELFIE? Well, None Other Than Montclair’s Own Astronaut and Moonwalker–Buzz Aldrin. 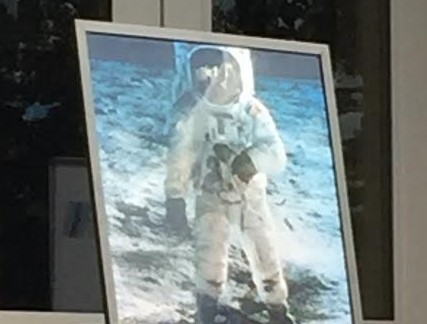 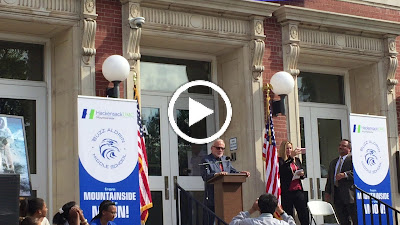 We all probably know that Buzz Aldrin was one of the very first astronauts to walk on the moon but I was pleasantly surprised to learn the following:

His mother, Marion Moon, was the daughter of an Army Chaplain and his father Edwin Eugene Aldrin was an aviation pioneer.

Buzz graduated one year early from Montclair High School and he attended the US Military Academy at West Point, graduating third in his class with a BS in mechanical engineering. He then joined the Air Force where he flew F86 Sabre Jets in 66 combat missions in Korea, shot down two MIG-15′s, and was decorated with the Distinguished Flying Cross. After a tour of duty in Germany flying F100′s, he earned his Doctorate of Science in Astronautics at MIT and wrote his thesis on Manned Orbital Rendezvous. 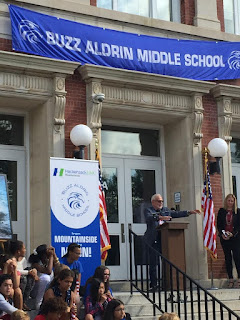 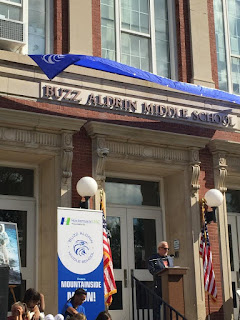 Selected by NASA in 1963 into the third group of astronauts, Aldrin was the first with a doctorate and became known as “Dr. Rendezvous.” The docking and rendezvous techniques he devised for spacecraft in Earth and lunar orbit became critical to the success of the Gemini and Apollo programs, and are still used today. He pioneered underwater training techniques to simulate spacewalking. In 1966 on the Gemini 12 orbital mission, Buzz performed the world’s first successful spacewalk – extra-vehicular activity (EVA), and set a new EVA record of 5 1⁄2 hours. During that mission he also took the first ‘selfie’ in space.

On July 20, 1969, Buzz and Neil Armstrong made their historic Apollo 11 moonwalk, becoming the first two humans to set foot on another world. An estimated 600 million people – at that time, the world’s largest television audience in history – witnessed this unprecedented heroic endeavor.

Upon returning from the moon, Buzz was decorated with the Presidential Medal of Freedom and numerous awards all over the world. Named after Buzz are Asteroid “6470 Aldrin” and the “Aldrin Crater” on the moon. In 2011 along with his Apollo 11 crew mates Neil Armstrong and Michael Collins, he received the Congressional Gold Medal.

Buzz is the author of 9 books, most recently his children’s book, Welcome to Mars: Making a Home on the Red Planet and his newest NY Times and Washington Post Bestseller, “No Dream Is Too High: Life Lessons from a Man Who Walked on the Moon”. Both published by National Geographic.

In October of 2014 he revamped his ShareSpace Foundation to be focused on STEAM Education – Science, Technology, Engineering, Arts and Math to ignite the spark and fuel excitement for space in kids –Specifically for K-8. In August of 2015 he launched the Buzz Aldrin Space Institute at Florida Tech to promote and develop his vision of a permanent human settlement on the planet Mars.

Since retiring from NASA and the U.S. Air Force, Col. Aldrin calls himself a Global Statesman for Space and has remained a tireless advocate for human space exploration.” –from the Bio section of his very own website: buzzaldrin.com

Selling a Glen Ridge/Montclair/Maplewood/Millburn/Short Hills area home involves many steps and having an experienced Maplewood New Jersey Real Estate Agent and Realtor®, specializing in the Bedroom Communities of New York City in Essex/Union County— Glen Ridge, Montclair, Millburn, Short Hills, West Orange, South Orange, Livingston, Maplewood, Springfield, Summit, Madison, Chatham, Scotch Plains, Fanwood, Cranford and Westfield–by your side will make the transaction run a lot smoother. I would love to be your Montclair, Glen Ridge, Maplewood/South Orange New Jersey Area Real Estate Professional! I assist both buyers and sellers in the Bedroom Communities of New York City, mostly served by NJ Transit’s Mid-Town Direct Train Lines, offering commutes of 45minute or less to NY Penn Station, with either the purchase and or sale of residential real estate. Want to know how we consistently sell our clients’ homes for more $? www.sellinghousesformore.com

As your Glen Ridge, Montclair, Maplewood/South Orange/Short Hills/Essex/Union County New Jersey listing agent I am well versed on as your local expert in all things in the Maplewood and South Orange area Real Estate Market. You can expect personalized service that includes a detailed consultation on how to best position your Mid-Town Direct home to be competitive in today’s market with training to provide my clients with an in-depth Advanced Comparative Market analysis, and advice on staging. As my office’s technology officer as well as both a Zillow Platinum Premier and Trulia Premier agent, I use the latest and most up-to-date marketing methods to get your home in front of as many buyers as possible. Being your New Jersey Real Estate Agent and Realtor ® not only involves just finding the home or selling the home, but being your guide, negotiator, advisor and advocate and making sure that your needs and goals are met. Being your New Jersey Essex/Union County area Realtor® (with a little bit of Morris County thrown in for good measure) is one of my truest passions, and “Helping You Find Your Dream Home” is my number one priority.

There are currently no listings in Glen Ridge Boro Township,Montclair Township but please check out these great listings: