A follower posted this article on my Love to Live in Maplewood FB page and I thought I would share it: 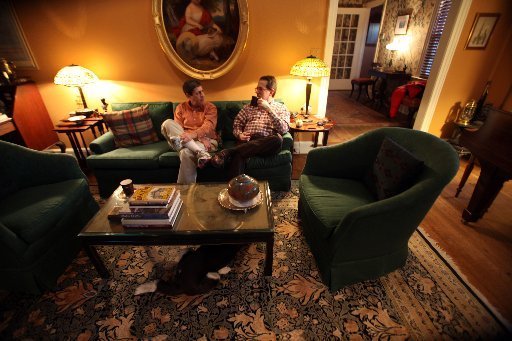 Ulysses Grant Dietz landed in this leafy suburb decades ago, settling comfortably into a 1930s-era Tudor and fancying himself not unlike the Cleavers, the iconic 1960s television family of “Leave It to Beaver.”
“It lived up to the fantasy I had in my mind of living in a kind of sitcom suburb,” says Dietz, whose maroon Volvo is parked outside along the hilly tree-lined street. “My friends jokingly referred to this as ‘Leave It to Beaver’ land.”
Dietz soon reveled in his new surroundings. He’d walk “Penny,” then the family’s standard poodle, up the street, all the while whistling the show’s signature jingle.
This, it turns out, was the ideal setting for Dietz, the great-great grandson of Ulysses S. Grant, the “Hero of Appomattox” and the nation’s 18th president. Here, it turns out, the church-going Newark Museum curator with a fondness for bow ties would settle down with his partner, work-at-home software engineer Gary Berger, and embark on a campaign to raise their two adopted children, Grace, 15, and Alex, 16. Not to mention Paige, the clan’s latest canine.
“We expected we’d be all alone out here and just figured — being young and idealistic — that we’d be fine, and we always have been,” Dietz says of their arrival as a same-sex couple way back in 1980. “We stayed where we were, and the town kind of evolved around us.” Now, there are two other male couples with adopted children on their block, he says. “It’s exactly the kind of community where we’d want to raise kids like ours.”

Why We Love It • Diversity is not just accepted, it is expected and embraced.
• A variety of places of worship where gay couples, individuals and families are welcomed. Where else can you make new gay friends at church?
• Publics schools where tolerance is the rule and teachers are open to families that are different.
• A bunch of nice restaurants, from the upscale Lorena’s to the Maple Leaf diner, where same-gender couples can be comfortable and turn into “regulars.” For us, it’s the Highland Place Grill.
• A great dog park in the South Mountain Reservation where our dog can meet friends and we can take her there together.
• Great food shopping, in Maplewood and South Orange — Eden Gourmet and Kings and TraderJoe’s and Whole Foods just outside of town — so couples who like to cook can find anything they want. The local Pathmark has every ethnic food under the sun.
• Super public pools where gay couples can join as families, even if it’s just a family of two.
— Ulysses Grant Dietz, senior curator at the Newark Museum

This is, after all, Maplewood, where the governing body in 2009 adopted a resolution calling for marriage equality for same-sex couples in New Jersey. It is home to the Rainbow Families of Maplewood/South Orange. It is where 265 couples lined up across the front lawn of Maplewood Town Hall to register on the first day after New Jersey granted domestic partnerships in 2004. Just last year, Vic DeLuca, a Clifton native who long ago settled in Maplewood and now serves as mayor, proclaimed June as Lesbian, Gay, Bisexual and Transgender Pride Month. “We’re trying to send a very deliberative message that gay families and gay couples are welcome in our community and are valued members of our community,” DeLuca says.
Maplewood — and by extension, its sister community, South Orange — is part of what Steven Goldstein of Garden State Equality calls the “peak” of the state’s most gay-friendly residential “corridor,” stretching through a swath of western Essex County.
It is home to Columbia High School, whose Maplewood-South Orange alumni roster includes the likes of actress Elisabeth Shue and Grammy-wining singer Lauryn Hill and whose clubs include Spectrum, for straight and LGBT students.
It is also where Grace and Alex go to school.
“It’s the perfect school for them,” Dietz says, seated amid his famous family’s heirlooms: a bust of the famed Union Army general on the living room secretary’s desk and an oil portrait of Dietz’ great-grandmother, Clara Root, as a child.
“They’ve never been teased because they’re different in any way. It’s a real bubble here, and I mean that in a good way,” he says.
Sure, the great-great grandson of the man who accepted General Robert E. Lee’s surrender at the Appomattox Courthouse in 1865 once “crossed swords” with the town fathers. It was back in the 1980s, when Maplewood’s public pool had a narrower definition of “family” memberships.
“Families were mother and father and kids, and we didn’t count. So we made the point that we were a family,” Dietz says. That’s when the couple and some like-minded friends fired off a letter. “Do you really want to get the ACLU in here,” Dietz says of the letter’s contents. Then, the white flag of surrender was hoisted. “They just caved instantly.”
It was in Maplewood, too, where Deitz, a self-described child of WASP privilege from Syracuse, N.Y., and a Yale Ivy-leaguer, early-on found a church family at St. George’s Episcopal Church when he was looking for a place to hold meetings of the Organization for Gay Awareness. At the time, the Rev. Craig Burlington was rector.
“He was just so kind and welcoming, and it wasn’t just, ‘Oh, we’ll let you use this space.’ It was, ‘You’re welcome in this church too.’ That was fairly dramatic.” Before long, Dietz had more than a decade’s service as a church vestryman and warden. “I’m still the head of the altar guild and I’m a lay reader,” he says.
Yet, Dietz realizes there are potential skirmishes ahead. Not long ago, the family living room was the setting of Dietz and Berger’s civil union, administered by a New Jersey judge before friends and family. But they’re not ready to hasten a quick retreat to Massachusetts, where gay marriage has been legalized. There’s still a civil war of sorts being waged right at home.
“New Jersey will come around eventually,” he says. “My next step is to make sure I can get a wedding announcement in The New York Times. So I think we’ll wait.”