A slice of Heaven in Maplewood

Not a Typical Pizza Place Anymore 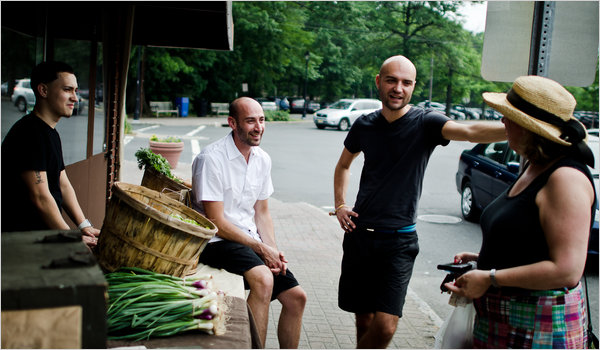 MAPLEWOOD, N.J. — Four years ago, Arturo’s, a corner pizzeria here, resembled countless others that sold slices and takeout pies to customers who were not asking who grew those tomatoes, where, or how.
Enlarge This Image

The kitchen of Arturo’s restaurant in Maplewood, N.J.
But a pair of new, young owners have turned Arturo’s into a favorite among advocates of local agriculture and artisanal fare. It mills grain for its bread and pizza crust, and takes pains to tell customers which nearby farms produced ingredients from kale to sausage.
The chef, Dan Richer, was named a semifinalist for a James Beard Foundation award this year — akin to a film made by unknowns contending for an Oscar. He did not win the prize, but the word was out, far-flung foodies started making the trip, and the lines of people waiting for tables got even longer.
Yet the new incarnation of Arturo’s does not seem out of place in this little town, with the kind of crowded, varied and innovative restaurant scene that city dwellers think is theirs alone.
Not so long ago, the suburban pickings were slimmer and more predictable, but as the population of the suburbs became more cosmopolitan, the food choices — while not exactly rivaling Manhattan’s — did, too. Over the last generation, several towns scattered around the region, like Chatham, Hoboken and Montclair, N.J., and Port Chester, N.Y., have become known for restaurant clusters worth exploring.
In that time, the people of Maplewood, like those of many other towns, grew more affluent, and much more likely to be foreign-born, college-educated and nonwhite. Young professionals who found themselves priced out of Manhattan and Brooklyn moved here to raise children, a trend that accelerated in 1996, when New Jersey Transit increased the number of train lines taking commuters directly into Penn Station.
“When we moved here 15 years ago, there were a couple of white-tablecloth places, two basic mom-and-pop pizza shops and a few other things,” Florence Drattler-Gold, a nurse practitioner, said. “They’ve really raised the bar since then, and there are many more choices.”
Two French restaurants here with classically trained chefs, Lorena’s and Verjus, were winning accolades well before Arturo’s changed hands, and the local scene now encompasses Indian, Mexican, Chinese, Japanese, pub fare and several takes on Italian. Maplewood, a town of 24,000 people, has two dozen restaurants, most of them jammed into a three-block strip alongside the train station.
“I think it really reflects the way the town has changed — a lot more diverse, maybe more sophisticated, and more expensive,” said Isabel Watson, a teacher who has lived in the area on and off since the late 1990s.
Arturo’s, a tiny space with minimal décor and a poorly equipped kitchen, has been an unlikely success story. Mr. Richer, 30, never took a cooking class and never apprenticed in someone else’s kitchen. He and his co-owner, Fred Shandler, 28, did not set out to be restaurateurs until they were out of college, and they learned the business and the food by trial and error.
On a trip to Rome nine years ago, Mr. Richer said, “I was blown away by the food, and I came home with the conviction that something was missing here.” He taught himself by reading cookbooks, watching cooking shows and “practicing on my friends and family.”
He bought Arturo’s in 2007, attracted by its wood-burning pizza ovens, and two years later Mr. Shandler came on as a partner. It never occurred to them that it might be presumptuous for a couple of upstarts to try to show New Jersey — New Jersey! — how Italian food should be done.
Their approach embraces several culinary trends, including the “locavore” movement — they even host a weekly farmer’s market to help support their favorite suppliers — and the idea that good food need not be formal, complex or expensive. They see pizza as their centerpiece, not a poor relation, though after years of experimenting with dough, and using ingredients like truffle oil, feta and wild boar ragù, it is a far cry from the old Arturo’s.
“It’s been astounding to watch this transformation, where it became a destination,” said Hank Zona, a frequent Arturo’s customer. “But that’s true of Maplewood in general.”
Among people who have lived here for a long time, however, not everyone loves the change. Angela Riley, a retired secretary, dismissed the new Arturo’s as “too chichi” and said she still did not understand why it had stopped selling individual slices, or offering staples like pepperoni.
Jeff Bruckner, an executive at a software company, said that he appreciated the food at Maplewood’s more ambitious restaurants but rarely went.
“These upscale places are always crowded and noisy,” he said. “It’s just too much effort.”

A version of this article appeared in print on July 11, 2011, on page A15 of the New York edition with the headline: In New Jersey, Not a Typical Pizza Place Anymore.